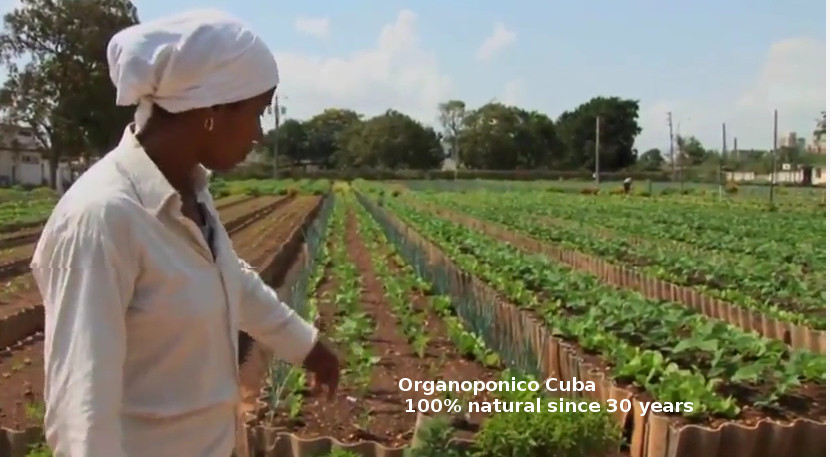 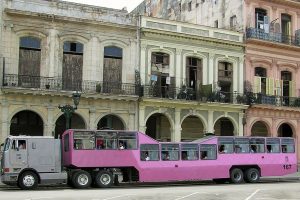 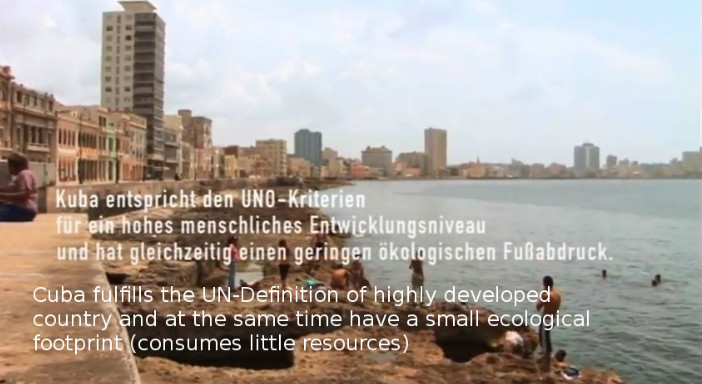 When Cuba faced the shock of lost trade relations with the Soviet Bloc in the early 1990s, food production initially collapsed due to the loss of imported fertilizers, pesticides, tractors, parts, and petroleum. The situation was so bad that Cuba posted the worst growth in per capita food production in all of Latin America and the Caribbean. But the island rapidly re-oriented its agriculture to depend less on imported synthetic chemical inputs, and became a world-class case of ecological agriculture.1 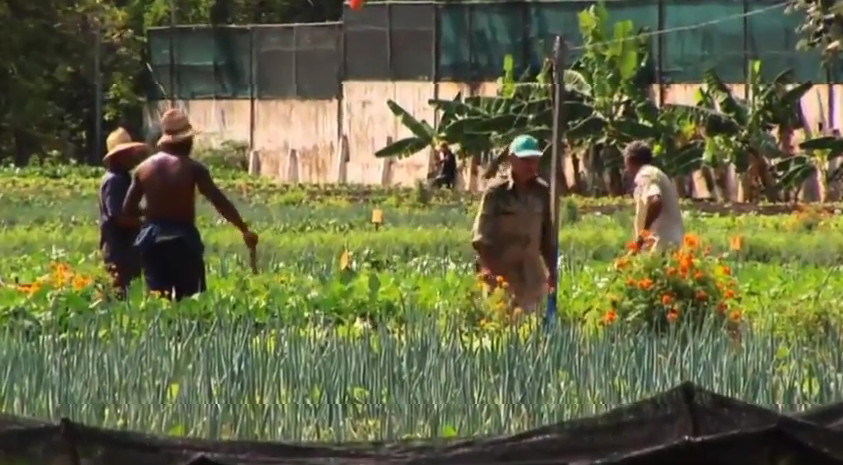 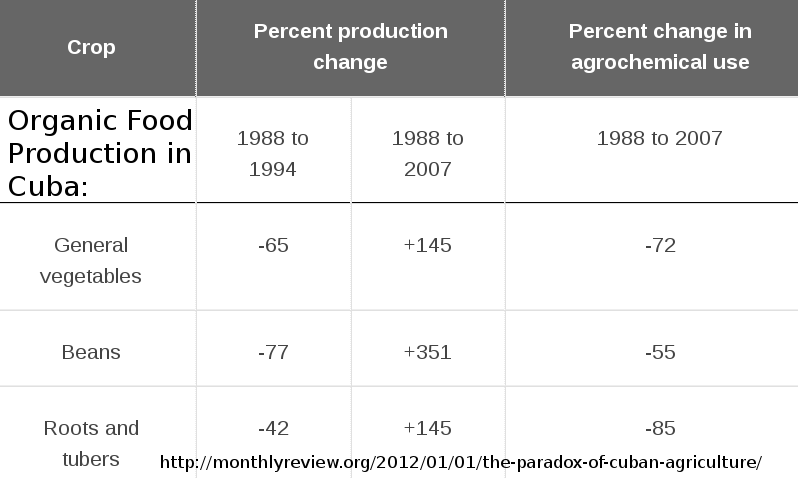 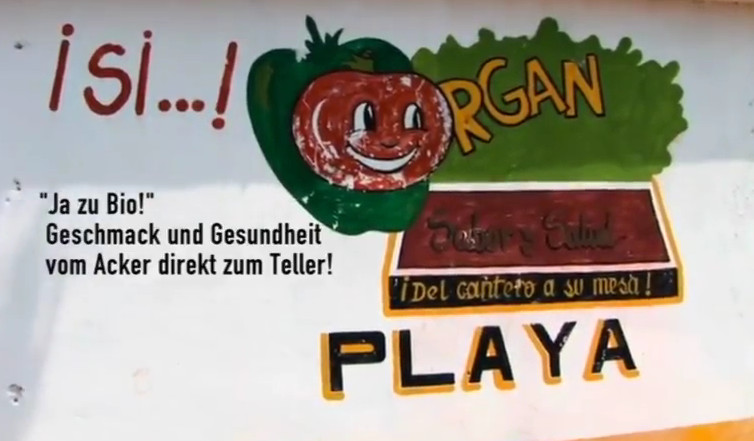 Kuba was forced by the US(EU) embargo to switch to 100% bio-natural self-sufficient agriculture.

No one starved. Without OIL AND CHEMICALS!

now also available in German BEER! THANKS A LOT MONSANTO!

Killing us SLOWLY WHILE MAKING PROFITS!

„We demonstrate, that the surface casting activity of vertically burrowing earthworms (Lumbricus terrestris) almost ceased three weeks after herbicide application, while the activity of soil dwelling earthworms (Aporrectodea caliginosa) was not affected.

Reproduction of the soil dwellers (earthworms) was reduced by 56% within three months after herbicide application.

Herbicide application led to increased soil concentrations of nitrate by 1592% and phosphate by 127%, pointing to potential risks for nutrient leaching into streams, lakes, or groundwater aquifers.

These sizeable herbicide-induced impacts on agroecosystems are particularly worrisome because these herbicides have been globally used for decades.“

During the Cold War, the Cuban economy relied heavily on support from the Soviet Union. In exchange for sugar, Cuba received subsidized oil, chemical fertilizers, pesticides and other farm products. Approximately 50% of Cuba’s food was imported. Cuba’s food production was organized around Soviet-style, large-scale, industrial agricultural collectives.[1] Before the collapse of the Soviet Union, Cuba used more than 1 million tons of synthetic fertilizers and up to 35,000 tons of herbicides and pesticides per year.[1]

With the collapse of the USSR, Cuba lost its main trading partner and the favorable trade subsidies it received, as well as access to oil, chemical fertilizers, pesticides etc. From 1989 to 1993, the Cuban economy contracted by 35%; foreign trade dropped 75%.[1] Without Soviet aid, domestic agriculture production fell by half. This time, called in Cuba the Special Period, food scarcities became acute. The average per capita calorie intake fell from 2,900 a day in 1989 to 1,800 calories in 1995. Protein consumption plummeted 40%.[1]

Without food, Cubans had to learn to start growing their own food rather than importing it. This was done through small private farms and thousands of pocket-sized urban market gardens—and, lacking chemicals and fertilizers, food became de facto organic.[2] Thousands of new urban individual farmers called parceleros (for their parcelas, or plots) emerged. They formed and developed farmer cooperatives and farmers markets. These urban farmers found the support of the Cuban Ministry of Agriculture (MINAGRI), who provided university experts to train volunteers with organic pesticides and beneficial insects.

Without artificial fertilizers, hydroponic equipment from the Soviet Union was no longer usable. Instead, they were converted for the use of organic gardening. The original hydroponic units, long cement planting troughs and raised metal containers, were filled with composted sugar waste, thus turning hydroponicos („hydroponics“) into organopónicos.

The rapid expansion of urban agriculture in the early 1990s included the colonization of vacant land both by community and commercial groups. In Havana, organopónicos were created in vacant lots, old parking lots, abandoned building sites and even spaces between roads.

The collapse of the Soviet Union, ending 1991, decimated the Cuban economy. The country lost approximately 80% of its imports, 80% of its exports and its Gross Domestic Product dropped by 34 percent. Food and medicine imports stopped or severely slowed. Perhaps most immediately impactful, however, was the loss of nearly all of the oil imports by the USSR; Cuba’s oil imports dropped to 10% of pre-1990 amounts.

Before this, Cuba had been re-exporting any Soviet oil it did not consume to other nations for profit, meaning that petroleum had been Cuba’s second largest export product before 1990. Once the restored Russian Federation reemerged out of the wreckage of the Soviet Union, its administration immediately made clear that it had no intention of delivering the tanker after tanker of petroleum that had been guaranteed the island by the USSR; in response to this notification, Fidel Castro angrily cut off all oil delivery from Russia, merely one week later. He fell witness to an immediate need to reduce domestic consumption of what remained by 20% over a span of just twenty-four months.

The effect was felt immediately. Entirely dependent on fossil fuels to operate, the major underpinnings of Cuban society—its transportation, industrial and agricultural systems—were paralyzed. There were extensive losses of productivity in both Cuban agriculture — which was dominated by modern industrial tractors, combines, and harvesters, all of which required oil to run — and in Cuban industrial capacity.

The early stages of the Special Period were defined by a general breakdown in transportation and agricultural sectors, fertilizer and pesticide stocks (both of those being manufactured primarily from oil derivatives), and widespread food shortages. Australian and other permaculturists arriving in Cuba at the time began to distribute aid and taught their techniques to locals, who soon implemented them in Cuban fields, raised beds, and urban rooftops across the nation.

Organic agriculture was soon after mandated by the Cuban government, supplanting the old industrialized form of agriculture Cubans had grown accustomed to. Relocalization, permaculture, and innovative modes of mass transit had to be rapidly developed. For a time, waiting for a bus could take three hours, power outages could last up to sixteen hours, food consumption was cut back to one-fifth of their previous levels and the average Cuban lost about twenty pounds. Although starvation was avoided, persistent hunger, something not seen since before the Cuban Revolution, suddenly became a daily experience, and initially, malnutrition in children under five was evident after just a few weeks of these food shortages.

The United States law allowed humanitarian aid in the form of food and medicine by private groups. Then in March 1996, The Helms-Burton Act imposes penalties on foreign companies doing business in Cuba, and allowed U.S. citizens to sue foreign investors who use American-owned property seized by the Cuban government. Due to the external factors contributing to the energy crisis in Cuba, the collapse of the USSR who was their main source of petroleum and food imports, along with the various stages of the US embargo, this is referred to as an „artificial“ peak oil.

The Cuban government was also forced to contract out more lucrative economic and tourism deals with various Western European and South American nations in an attempt to earn the foreign currency necessary to replace the lost Soviet oil via the international capitalist markets. Additionally faced with a near-elimination of imported steel and other ore-based supplies, Cuba closed refineries and factories across the country, eliminating the country’s industrial arm and millions of jobs. The government then proceeded to replace these lost jobs with employment in industrial agriculture and other homegrown initiatives, but these jobs often did not pay as well, and Cubans on the whole became economically poorer. Alternative transportation, most notably the Cuban „camels“ — immense 18-wheeler tractor trailers retrofitted as passenger buses meant to carry many dozens of Cubans each — flourished.

Food-wise, meat and dairy products, having been extremely fossil fuel dependent in their former factory farming methods, soon diminished in the Cuban diet. In a shift notable for being generally anathema to Latin American food habits, the people of the island by necessity adopted diets higher in fiber, fresh produce, and ultimately more vegan in character. No longer needing sugar as desperately for a cash crop — the oil-for-sugar program the Soviets had contracted with Cuba had, of course, dissipated — Cuba hurriedly diversified its agricultural production, utilizing former cane fields to grow things like oranges and other fruit and vegetables. The Cuban government also focused more intensely on cooperation with Venezuela once the Socialist Hugo Chávez was elected president in 1998.